Nicholas attended Loretto school in Edinburgh, and from there was put forward by the headmaster for The Reeves-Smith scholarship, within The Savoy Group of hotels, London. This application process delivered one of 12 annual places as a Savoy Hotel management trainee. Nicholas worked front-of-house and in the kitchens of Claridge’s, Mayfair.

Thereafter becoming the opening Restaurant Manager at the age of only 21, of London’s brand new groundbreaking The Pelham Hotel, owned by Tim and Kit Kemp’s Firmdale Hotels.

After this, Nicholas returned to Scotland and became House Manager of Edinburgh’s Prestonfield House hotel.

Then started at Balbirnie House as GM and company director at the age of 25, on 31st October 1992, becoming company Managing Director in 2005.

Nicholas especially loves personally meeting as many of Balbirnie’s prospective new wedding clients, as is possible. ‘This is always the most special part of my working week’.

Nicholas and his wife Gaynor jointly became Scotland’s Hoteliers of the Year in 2011. In 2014 Nicholas was the recipient of The Fellowship, the highest individual award ever bestowed by The Judges of The Scottish Hotel Awards.

From 2015 onwards, as a hobby which became more than a hobby, Nicholas has voluntarily overseen the YesDayScotland media portal, becoming Scotland’s groundbreaking, pioneering features writer on this ultra niche subject, on the interface between blockchain’s #dlt distributed ledger technology, and democracy. Having also hosted Scotland’s inaugural Blockchain summit in March 2018, Balbirnie House is Scotland’s birthplace for blockchain democracy.

Nicholas plays golf at St Andrews, and has previously held a handicap of 5. Nicholas took up running in 2014 at the age of 46, and then joined Glenrothes Triathlon Club, successfully completing the 2018 Edinburgh Half IronMan 70.3 – and then following 15,000 kilometres of combined swimming, cycling and running training, completing the full IronMan 140.6 in Austria July 2019. Subsequently therefore becoming Scotland’s only IronMan hotelier, and the very first hotelier to be congratulated on becoming an IronMan, by Scotland’s Parliament.

In his spare time, Nicholas enjoys family walks with Balfour the hotel Cocker Spaniel, reading about future-forecasting in Hospitality, yoga, and he has somehow developed some expertise in relation to Chinese cooking, focussed on the Sichuan province of southwestern China.

The above summary is an adaption of a full Blog Post charting Nicholas and his 35 year journey in Hospitality. 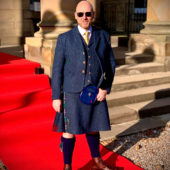