Company director Gaynor Russell fell into Hospitality, by complete accident! Her father Ian was managing the greenkeeping of Balbirnie Park Golf club, and chatted with her husband-to-be Nicholas, who had started as Balbirnie’s GM. Gaynor’s father had assured Nicholas that his daughter had hospitality in her blood, and would be a truly wonderful asset to the company. During the time leading to this, Gaynor was working in a law office and let’s just say … finding it rather placid, and as the saying goes … the rest is now history.

Gaynor quickly became totally smitten with the hotel industry, and was voted by Balbirnie’s brigade as Employee of the Year, and thereafter decided to take the leap and work in Scotland’s capital city to gain some experience in the five star hotel sector. Spending time away gave Gaynor some great experience, and then led to her returning back to Balbirnie House in 1999, to head up the wedding department and the opening of the Millennium Ballroom.

After opening Balbirnie’s Millennium Ballroom, Gaynor was invited to join Balbirnie’s board of directors, charged with the successful running of the company.

‘The early days of Balbirnie wedding planning 1999 onwards were a 1 girl operation. The initial journey of growing from providing the backdrop from 50 weddings per year, to double that, it was an incredibly exciting time. Most wedding venues assign a very definitive timeline in which they will (and will not!) speak to clients, I ditched that approach as used by other hotels, and started liaising with all clients in real time. As I was on my own, this was literally 7.30am until 7.30pm daily. That’s the same system as remains today, albeit we now have 4 people working in our Special Events Planning office, with 3 permanently aligned to wedding planning’.

Gaynor’s love for weddings continued to grow and she found herself as Scotland’s ‘Wedding Planner of the Year’ via The Scottish Hotel awards scheme. ‘We began delivering circa 150 weddings per year, it was surreal to chart the progress each year. We never knew it then, but we would end up seeing our busiest two back-to-back wedding years thus far delivering 165 and 163 weddings respectively’. Underlined, Balbirnie has only ever provided the capability for one wedding to take place on any given day.

History in the making. Gaynor became Scotland’s national Hotelier of the Year (jointly with husband Nicholas), becoming the youngest ever hotelier of the year, in 2014 at the age of 31.

Not only is Gaynor a very busy mum with two daughters, she also oversees the hotel’s ever-evolving interior design. Design doyen Gaynor’s passion for making spaces more beautiful and functional are always priority, when it comes to reinvesting in the fabric of the building. ‘We respect the inherent aesthetic principles of the original, but design should always be progressive, and sometimes rock-n-roll. We don’t do cookie-cutter replicated bedrooms, each bedroom project will always be different. The place has to keep feeling lived in, and loved. My interior design overview has been learnt in the school of life. I’m absolutely delighted with progress over recent years, every single one of our public areas has been re-designed, and our 2017 Drawing Room project with Archie Forrest in particular, was a surreal project to work with’.

When not on hotel duty, Gaynor suffers from a severe case of wanderlust and loves nothing better than planning the family’s next holiday, with Scandinavia always being her absolute favourite, considering how we can further adapt to providing a Scandinavian mentality in the Scotland workplace. You will find many Danish influences throughout the hotel if you look carefully enough, and her favourite is that funny old word “Hygge“, which translates to: the art of cosyness, and what a great family house in which to experience it.

Gaynor loves Instagram, playing golf at St Andrews, and walking Balfour the hotel Cocker Spaniel. As a runner, Gaynor recently clocked The Edinburgh half marathon at 2 hours 7 minutes. As a home cook Gaynor loves the food of Thailand, and in terms of refreshments is known by friends as, ‘Sauvignon Blond’.

‘It has been amazing to be so immersed in Balbirnie House for all these years, and to have been so directly operationally involved, leading our brigade as a company director, to achieve absolutely unique global recognition twice. That was driven by our success with The Scottish Hotel of the Year awards scheme, my sincere gratitude to everyone therein who has helped accelerate all innovation and evolution’.

Favourite company director saying: ‘The future of Scottish Hospitality, it’s all there to be created!’ 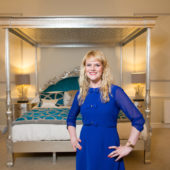